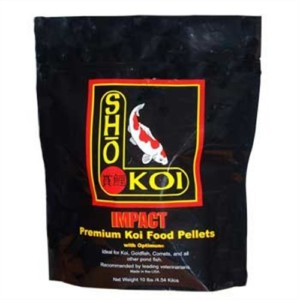 Sho Koi Food was tested by me more than ten years ago and promoted very rapid growth and excellent health. Because the diet performed well in terms of rapid growth and palatability, this diet receives my recommendation.

An accurate ingredient list is not available. I did a LOT of work on this food in 2004-2007 testing it’s abilities to speed healing, fend off disease and the most remarkable thing I found was a NOTABLE,measurable improvement in growth rates in Koi. Compared to another group of Koi fed another diet, (which confounded the study) the Sho Koi groupd grew faster. The study should have tried the food against several / many other foods. the This is a VERY good food but I can’t give you any details, for lack of a nutritional breakout.

Sho Koi contains “Impact / Optimmune” which is Beta-glucan. “Beta-glucan” which stimulates the immune system. Harvard University researchers described the mode of action of beta-glucan as stimulating the immune system through receptors on the surface of certain cells, called ‘macrophages’ that when activated, stimulate a cascade of events turning the body into “an arsenal of defence”.